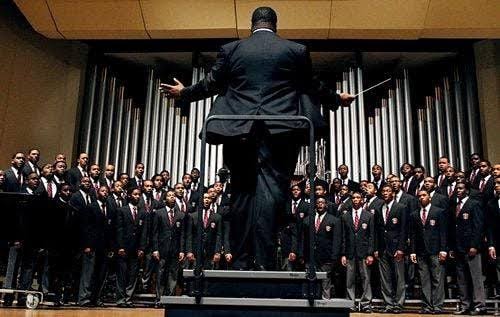 When you’re told that the music department of the Mountain Top University, Prayer City, Lagos, is adjudged the best in the continent of Africa, you need not doubt it.

A tour of the state-of-the-art facilities in that department will wow any doubter. Right from the expressway, you’d see the department building boldly identified as Organ House. The building itself is artistically designed as a huge organ, hence, the name, Organ House. And then, once inside the University, you’re ushered into the Organ House with these words, ‘Centre of Excellence in Music’. That is no lie. In this department, you’d be right to say in our local parlance, this is where ‘music jam music’.

Last Wednesday at the Organ House was particularly exciting as all the way from Atlanta Georgia, USA, the Morehouse College Glee Club which is on tour of Nigeria, joined the Mountain Top University’s music department and MFM Conservatory choir in a thrilling musical experience. The Morehouse Club made up of over 30 male students and their handlers, rendered 4 numbers such as, ‘Behold Now Praise the Lord’; a spiritual- ‘Somebody Calling My Name’, etc. What comes to mind listening to these amazing singers is Handel Messiah’s classic, ‘Hallelujah’. And just when we thought they were through, Timothy Miller’s spellbinding solo rendition, ‘You’ll Never Walk Alone’, signaled the show was just beginning. He was simply amazing and the audience responded with the appropriate ovation.

The Mountain Top music department did not disappoint either. They first swept the Morehouse Club off their feet with an exhilarating African traditional dance. It was a thrill for the visitors. After that, they performed about four numbers; ‘Let It Rain’ (Ojo Maro), ‘Gbogbo Aye Gbe Jesu Ga’ (Lift Jesus up), etc. The songs performed were composed by the University’s Chancellor, Dr D.K Olukoya, Ayo Bankole and Dr Oluranti.

The Mountain Top Conservatory Choir from MFM headquarters Onike, Yaba, also rendered a number titled, ‘Be Still’, composed by Dr D. K Olukoya and directed by Seun Onifade.  The event was wrapped up with renditions by a mass choir comprising the three groups. The experience was heavenly; especially watching the Morehouse Club sing songs in Yoruba language- ‘Edumare Oseun Funmi’ and ‘I’m Building Me A Home’. You’d wonder when they had the chance to practice with the others.

The music event is a prelude and in fact, just a tip of what will take place on Friday July 15, 2022, when the institution’s music department which is 6 years, holds its maiden musical concert in the University Hall.  The event will double as the birthday celebration of the Chancellor of the University, Dr D. K. Olukoya.

It is not only that the building is shaped as an organ, it actually houses a good number of very massive organs and other musical instruments for learning. It also has two stages, a library stocked with books on music, listening room, well designed and equipped studios, music laboratory, etc. The music laboratory with over fifty work stations is where students process music. The equipment here helps the students to log in and analyse music.  “We are scholars, we do analysis, we are not only performing but we must be able to know why, how you perform. So, you can record music outside or bring recorded music, and begin to analyse it in the laboratory. It’s 24 hours on net. We also have online lectures here facilitated by lecturers from the US, and other parts of the world”, Dr Bayo Ogunyemi, Head of Music Depart of Mountain Top University explained.

In addition to the modern facilities, Dr Ogunyemi added that the institution has a programme which is called every student in music. What it means is that regardless of a student’s course of study, you must learn at least one musical instrument. Its compulsory. “We have over 50 instructors that come to teach them and write exams. You have a choice of instrument to learn, for four years”, he said, adding that

apart from becoming music entrepreneur that one can make money, music, irrespective of the genre is a rare course because its one of the few disciplines that combine simultaneously, the three process of learning- psychomotor, cognitive and Affective.  “We believe that music trains the mind and so, helps students’ development and concentration in other areas”, he added.

On the July 15 maiden concert, he said, “We feel we have grown enough to stage a concert. We’ve been performing but now as a department, we are having our maiden concert. We want to show what we’ve achieved. We’ll be doing orchestra, band, a lot of solos and chorus- normal art music singing.

“So, we’ll be celebrating Dr Olukoya that day as a music man and because he has done so much. Also, we’ve graduated students in composition and ethno music but no performer; so, this concert is important because for the first time, we’ll graduate performers”.