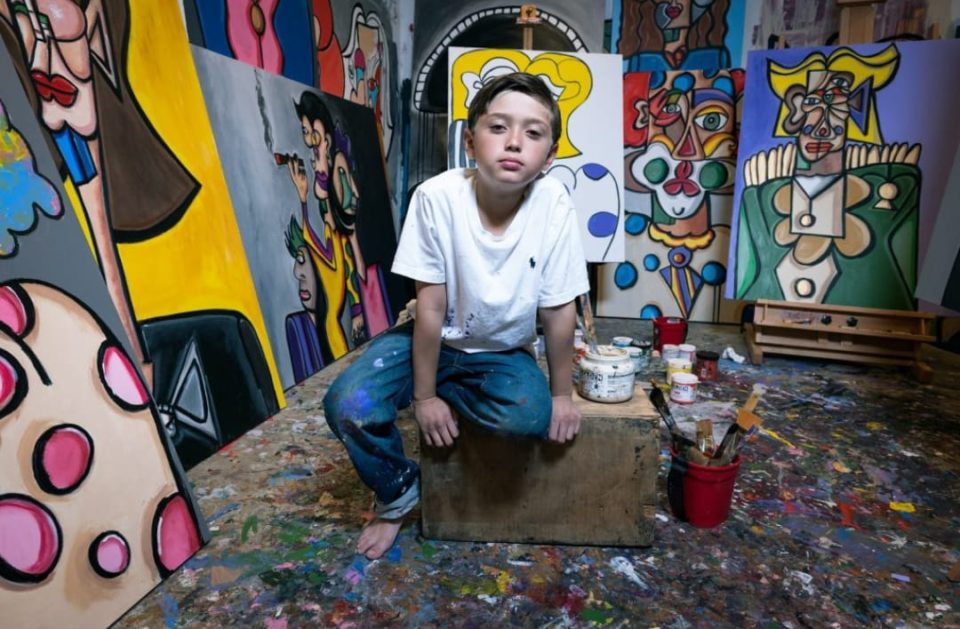 San Diego-based painter, Andres Valencia is a ten-year-old prolific artist whose work sells for over $230,000 (a whooping sum in Nigerian Naira) believes that younger persons would do much more in the arts industry than they are doing presently if they were given adequate encouragement and not have their aspirations stifled by the older generation.

Andres has stacks of attractive paintings in his San Diego studio. Although he is yet to commence middle school, he already features in high profile arts exhibitions, including solo shows in New York and Hong Kong where his auction debut attracted an amazing number of art enthusiasts. The young artist was accompanied by his family at the opening of his solo exhibition tagged, “No Rules” which held at New York’s Chase Contemporary Gallery.

Andres Valencia is inspired by the works of masters like Picasso and Pokémon. Following the Picasso’s model of “Guernica” on the horrors of war on humanity, Andres created an abstract scene titled “Invasion of Ukraine” which portrays the chilling effects of the Russia-Ukraine war that has been on since February this year. Images depicted in the painting include a single eye crying etched on a Ukrainian flag and a malevolent soldier, holding another flag, the Russian flag while menacingly wielding a machine gun.

Andres specializes in surrealism which fetches him prices as high as $230,000. He argues that the present-day society looks down on youngsters of his age bracket. According to him, the older ones think that most talented youngsters are incapable of creating spectacular artworks. “If you see a kid doing sketches on paper with a marker, a lot of people think that those drawings should not be put in a gallery,” he remarks.
Speaking fondly of the phenomenal young artist, his mother, Elsa Valencia was quoted in Forbes as saying: “Andres was in his bedroom as I was watching and listening to the news about the war in Ukraine. When I walked in, I saw a small 12-inch by 9-inch canvas sketched and colored with marker. I asked him about the painting. He said it was the ‘invasion of Ukraine.’ I was absolutely moved.” That discovery propelled Elsa to get Andre a larger canvas which further motivated the fifth-grader to go professional.