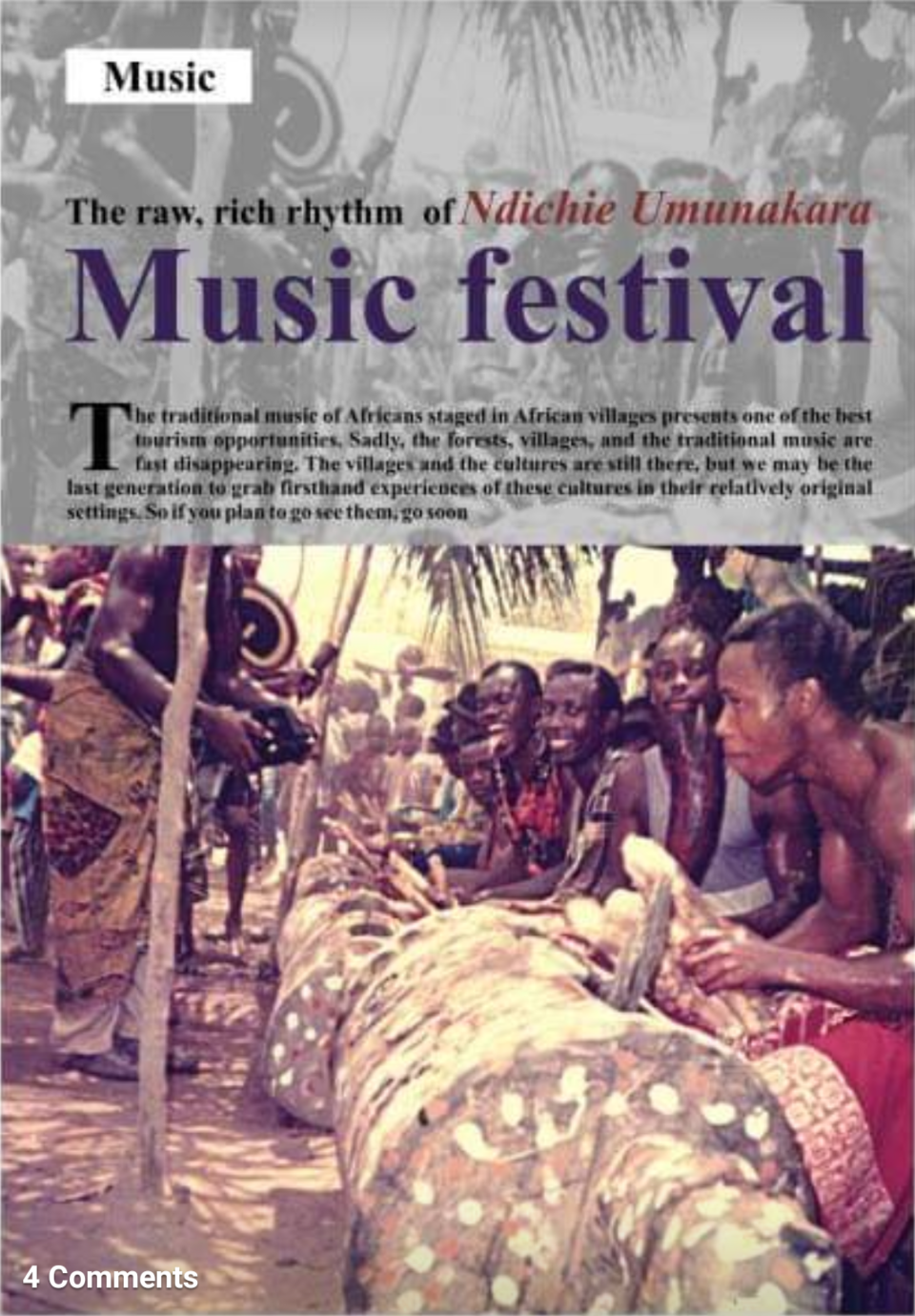 The traditional music of Africans staged in African villages presents one of the best tourism opportunities in the world. Sadly, the forests, villages and traditional music are fast disappearing. The villages and cultures are still there, but we may be the last generation to grab firsthand experiences of these cultures in their relatively original settings. So, if you plan to go see them, go soon.

The Ndichie music and dance, known as Ndichie Umunakara, is a musical festival celebrated yearly between February and March in Umunakara, a little but mighty village in Imerienwe, Ngor-Okpala, Imo State, Nigeria. Historically, Umunakara people owe their greatness to their prowess in inter-tribal wars, the Ndichie music which is globally exclusive to Umunakara, and in modern times, their skills in playing football and winning inter-community football matches.

The Ndichie music is an all wooden-slit drum orchestra made up of 8 wooden slit drums graduated from the biggest to the smallest in sizes. The biggest slit drum which is as big as a fully grown elephant, produces the deepest sound, hence it plays the bass part in the orchestra. The other 7 slit drums take their sizes proportionately from the biggest, playing different fast rhythms, down to the smallest whose tone is sharp, fast and piercing.

The musicians are mostly young men who learned the skills from elderly men. Women are traditionally prohibited to play the slit drums, but they could sing the songs and dance the music, though their feet are similarly prohibited to touch the slit drums as males traditionally do to assert their identity as citizens of Umunakara. It is believed that the citizenships of females in the community are only temporary since they would one day get married and leave the community for their husbands’ place.

Although everyone is free to take part in the free-for-all open air dances of music festival, special masquerades (about 13 of them in number) which are costumed in the village deity’s sacred forest, come out one after the other to perform at the open arena and make processions along the three kindreds of Umunakara, accompanied by a crowd of singing and dancing indigenes and visitors led by master singers who use metal gongs as musical instruments.

The Ndichie music has from time immemorial been an exclusive cultural practice of Umunakara people due to its connection with the Orieamafor deity. In Igbo land, people could adopt and practice other forms of indigenous music – the alija, abigolo, nwokorobo, ese, agaba, ojionu, kponkiti, atilogwu, etc., many of which are now extinct, but no one else plays the Ndichie music except the Umunakara people. If you want to see the Ndichie music and festival, you have to go to Umunakara between February and March.

Given that the Ndichie music has for more than a thousand years been an exclusive preserve of the Umunakara people, the owewelele rhythm (one of the two rhythmic patterns dominant in contemporary Nigerian popular music) is believed to have originated from the Ndichie music and dance (see Vanguard newspaper of March 6, 2017, p. 44. https://www.vanguardngr.com/2017/03/ndiche-umunakara-music-dance-warriors/ ).

Today, even with the misguided actions of some overzealous Christian indigenes of Umunakara who worked very hard to abolish the Ndichie Umunakara music and dance festival, youths of the cultural community and beyond have rallied round this unique musical tradition. They inherited it, perform it, and have vowed never to allow the great Ndichie music and dance to die.