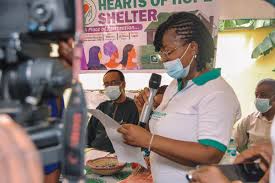 Gender-based violence is on an astronomic rise without commensurate support systems such as safe houses to serve as escape and rejuvenation platforms.

In response to the dire situation and in furtherance of their commitment towards ensuring that survivors of gender-based violence, GBV, are provided a safe shelter, the Centre for Children’s Health Education, Orientation and Protection, CEE-HOPE Nigeria and International Group, Hearts100, launched the Hearts of Hope Shelter recently.

The launch of the shelter which took place in Lagos, Nigeria, was well attended by representatives of Non-Governmental Organisations and activists including Dr. Nnimmo Bassey, Director, Health of Mother Earth Foundation, HOMEF, who doubled as the representative of Hearts100 in Nigeria; Mrs. Josephine Effah-Chukwuma, Executive Director, Project Alert and founder of the first shelter for women in Nigeria, and many others.

The event doubled as the official launch of the refuge for those impacted by gender-based violence – Hearts of Hope – and an occasion to specially draw attention to gross inadequacy of women and girl’s shelters in Nigeria.

Founder and Executive Director, CEE-HOPE Nigeria, Betty Abah, while speaking at the commissioning of the shelter, said Hearts of Hope was set up with the aim of providing a safe space for women and girls who are faced with diverse issues relating to gender-based violence.

The shelter, according to her, will “provide temporary accommodation, psychosocial support and empowerment for women and girls.”

Abah also frowned at the inadequate responses to gender-based violence by governments at all levels, noting that Nigeria has less than 20 shelters for women, and the ones in existence are run by private organizations.

“Many women remain in abusive relationships because they do not have any place to go and government shelters are very few and far in-between. As it is with government business, even the very few run by government are mostly on life support. Most of them are perennially deprived of qualified staff, food for residents and generally running at low and negligible budgets, if ever they exist.

“Besides the Lagos State and Ekiti State governments, which are doing credible work in response to GBV and have some of these infrastructure and legal mechanism in place, most other states in Nigeria are performing woefully in that front”, she said.

She however, called on governments both at National and state levels, “to consider the need for setting up of shelters as a major priority.”

While commissioning the shelter, Dr. Nnimmo Bassey, Director, Health of Mother Earth Foundation, HOMEF, who doubled as the representative of Hearts100 in Nigeria, commended CEE-HOPE Nigeria for the initiative which according to him, would bring relief to several concerned persons.

Dr. Bassey further harped on the need for the Nigerian government to do more to provide adequate housing for its citizens, especially for the less-privilege and GBV survivors.

Also, Mrs. Josephine Effah-Chukwuma, commended the CEE-HOPE boss for setting up the shelter.

Mrs Effah-Chukwuma reiterated that shelters are few in Nigeria and the task of housing GBV survivors could be overwhelming for CEE-HOPE Nigeria, but however advised that “you need to brace up for the task and your passion and commitment to the course would see you through.”