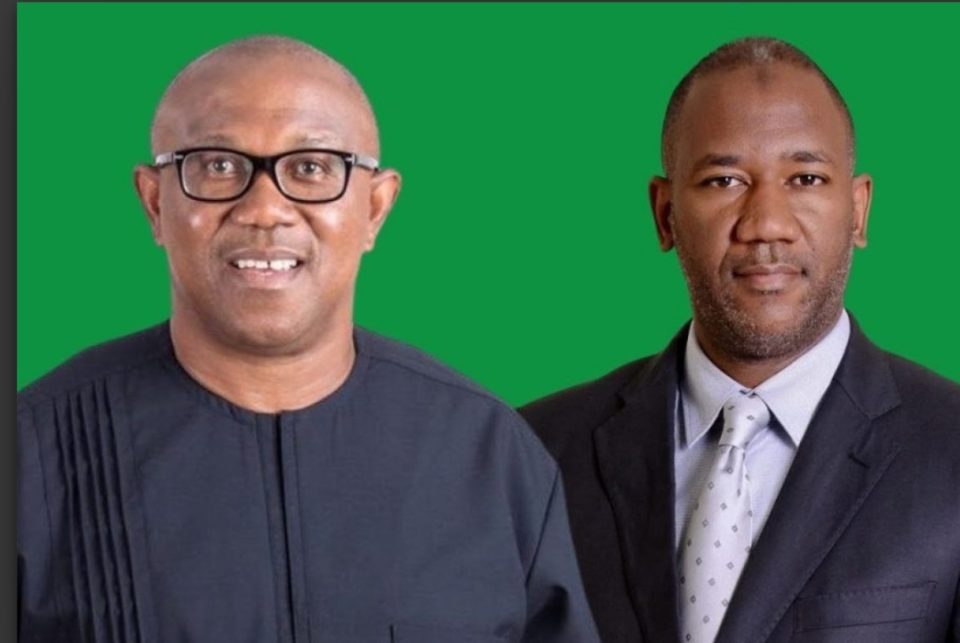 Bob-nosa conducted us round the studio to see some of his works in the making. He has spent his career as an artist using his works to protest against social and political injustice, especially police brutality.

Towards the end of the tour, laden with questions and answers which revolved around the current political situation in Nigeria and the emergence of the revolutionary Obidient Movement, we arrived at a very big canvas which seemed like the shrine of the Protest Art Studio from where inspirations flow and ideas incubate. In the middle of the big canvas, the artist had painted the words: Jesus and the two thieves.

Instinctively, and pointing at the inscription, I asked him: “Do you by any means here mean Obi-Datti & the two thieves?”

Bob-nosa never answered the question because he burst into a prolonged fit of laughter that infected all of us. The visit, the interview and everything ended with the outburst of laughter. With wet eyes we left the studio!

Although non of them is a Saint, or anywhere near Lord Jesus in holiness, Peter Obi and Yusuf-Ahmed Datti, by sheer act and timing of Providence, somehow appear to be like Jesus hung on the cross with two thieves also hung, one on his right and the other on his left.

The scripture records that one of the thieves had no conscience. He was not repentant of his sins of which he was truly guilty and was hung. He mocked Jesus and said: “Are you not the Christ? Save yourself and us!” (see Luke 23:32, 39-43).

But the other rebuked him, saying, “Do you not fear God, since you are under the same sentence of condemnation? And we indeed justly? We are receiving the due reward of our deeds; but this man has done nothing wrong.”
And then he said, “Jesus, remember me when you come into your kingdom.”

And Jesus said to him, “Truly, I say to you, today you will be with me in Paradise.”

Strange things happen. Situations, circumstances and events in the affairs of humans which shape history sometimes are pre-ordained.

In Nigeria’s 2023 election, Peter Obi and Yusuf-Ahmed Datti stand brighter and better chances than their two major opponents. First, Obi and Datti have political lives beyond 2023. So even if they lose the 2023 election, there may still be possilities for them in 2027 and 2031. But beyond 2023, there are no political lives for the other two opponents because they are too old.

So, although the critical condition in which Nigeria finds itself makes it so, in other senses, 2023 is not a do-or-die battle for Obi & Datti as it is for the two thieves.

However, from the look of things, Providence appears to have written the script that Obi & Datti will retire the two thieves who are symbols of the old tired order and the ailments that ail Nigeria.

One more little thing: I leave Nigerians to chose between the two thieves hanged with Obi & Datti, which one is the one that has conscience and asked for forgiveness?

Professor’s job at risk for saying only two sexes exist